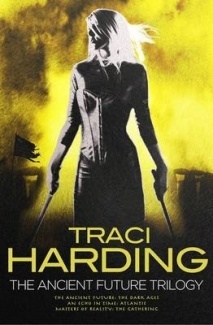 Late one evening, an accident near a ring of stones throws Tory Alexander across the vortex of time and space to the Dark Ages. There she meets Prince Maelgwn of Gwynedd and his band of warriors, who initially brand her as a witch and are frightened by her strange appearance. They finally overcome their fears and soon the tales of her adventures, brave deeds and beauty spread across the land. Twenty years later, Tory Alexander, from the 20th century, has ruled as Queen in 6th century Britain. But dark forces are stirring…Tory seeks the advice of the triple Goddess, and the women of the Otherworld send Tory through time to Plato’s City of the Golden Gates – Atlantis. Once there Tory has to find her own way home, and a cure for the High King’s sickness. In an epic climax, the Shining Ones and the Chosen, who are hiding within the circuits of times, gather to defeat the evil ones and bring about a new age of awareness to the world. Yet again, Tory must draw on all of her courage, strength of character and resourcefulness.

I’ve been reading Traci Harding since I was 13 years old – that’s 10 years. While her style greatly appealed to my adolescent self; it is her stories that keep me coming back to these old books.

Tory Alexander is an ass kicking (Australian!) heroine with awesome physical skills, wicked psychic skills (teleportation is the way of the future), and enviable people skills. Maelgywn, jealous rages aside, is a delightfully enlightened hero for a fantasy novel set in the dark ages.

What I Liked: Ancient Future: The Dark Ages is my favourite instalment of the trilogy. Tory’s adventures in time are fascinating and and the famous Welsh figures she encounters (Taliesin) bring the mythological history to life.

The series is a romantic epic – Tory and Maelgwyn’s love transcends time, space and even death, as they fight to remain side by side for eternity. Our adventures with Tory don’t end in the dark ages but travel into our technologically advanced past, and into our modern future where her descendants await her leadership. We visit Iraq, Babylon, Atlantis, the Moon and the very depths of the ocean to discover truth and raise the awareness of mankind.

Harding has a fascination with the Nephilim, who are the antagonists in her Ancient Future trilogy and her more recent Gene of Isis trilogy. They are portrayed as sociopathic demi-gods who enjoy watching the struggles of the developing humankind. She includes them in our history as Pharaoh’s, Goddesses and heroes, implying they had great influence over our development – they are presented as human kinds biggest obstacle to overcome.

The entire Atlantis storyline is breathtaking in its imaginativeness, and I love the ideas behind it. I wanted more from Turan, Adelgar and Duran. They were almost more fun, and certainly more enlightened than their Dark Ages counterparts.

What I Didn’t Like: Traci Harding has always weaved an excellent story. Harding’s understanding of history, ritualistic practice, mythology and spirituality bind together to create spell-binding epic with only one flaw. It’s not outrageously obvious, and doesn’t happen on every page, but Harding’s writing style can be a little immature. Her narrative and descriptions are beautiful and evocative but there are times when the dialogue let’s her down.

A common complaint, one that I share, is finding the use of ‘Brythonic English’ annoying rathering than endearing, a shame considering the number of thee’s, thou’s, and hast’s peppering the conversation. Since the dialogue is all in English instead of ancient Welsh or Brythonic, it might as well all match. There are also a few too many contemporary terms and phrases thrown about by basically uneducated medieval knights.

The Atlantis plot was definitely underdeveloped. It had the potential to develop the story further, and Tory’s character could have advanced spiritually with a little more time amongst the peaceful Atlantan people.
The characters could use more development, particularly Tory who is the heart and soul of the series. She needs more time to grow as a leader and an immortal; for someone who is meant to lead the immortal battalion against the Nephilim, she doesn’t develop much past her pot smoking introduction, despite supposedly conducting herself as a Queen and giving disapproving looks.

Conclusion: If you aren’t interested in time-travel, New Ages spiritualism, tae-kwon-do, or fantasy it isn’t worth picking up this book. If you are looking for an epic to enthral you, or a thrilling fantasy read you would be better off looking elsewhere.
This is a fun, light read that will only last a cursory reading. Deep analysis will be the downfall of these novels, despite their fun and imaginative plot.